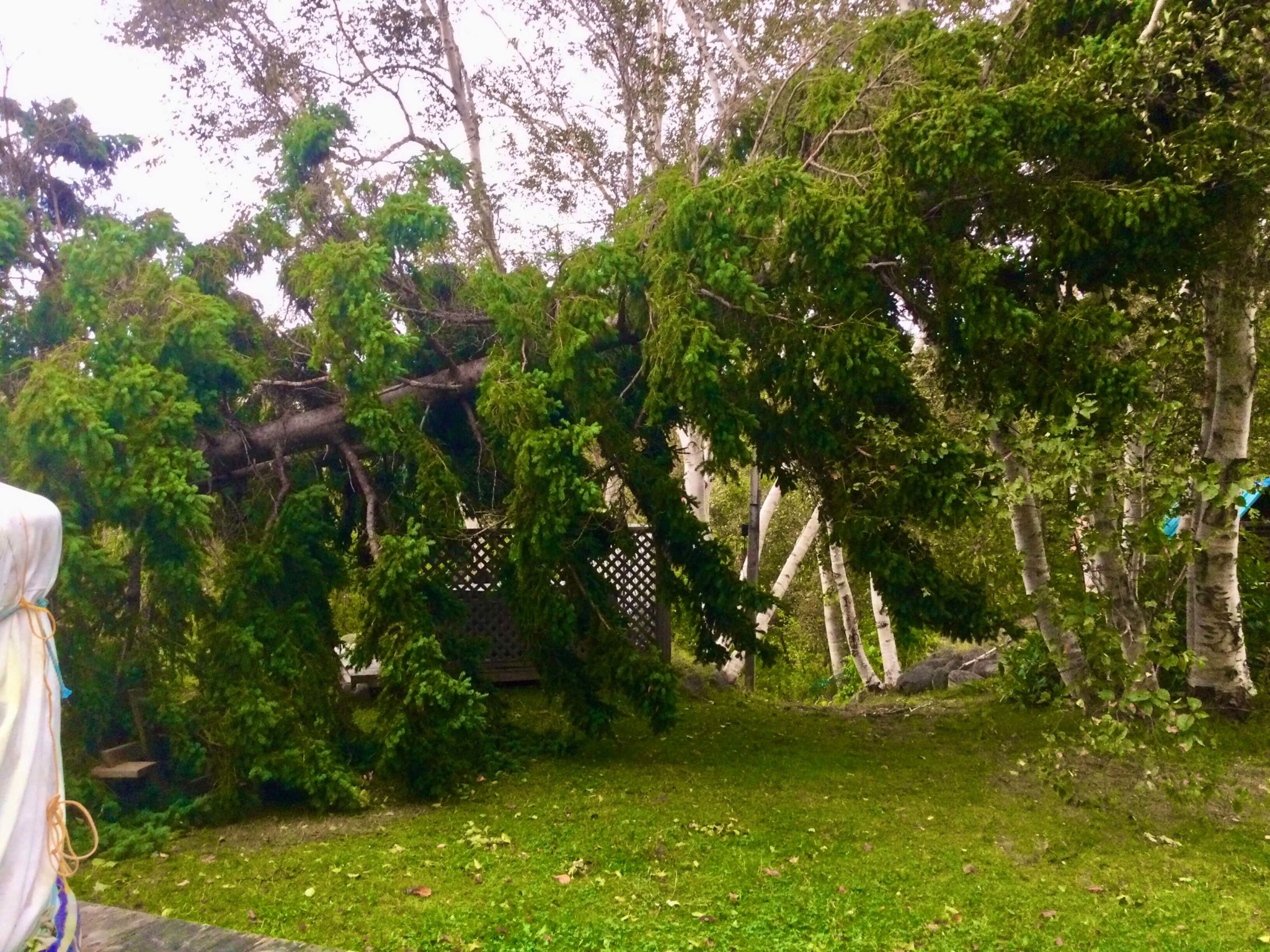 Fortunately damages to the Cabot Shores’ campus were minimal.  A tree fell onto the roof of the Meditation House, but mercifully missed a Solar Light recently installed but pretty much wrecked the roof and pushed again the Little Blue Yurt.  Trees fell just short of the Yurt Bathhouse, missing the Blue Chalet.  And other trees fell just beside the Little Sky Yurt and Hot Tub.

Just 3km from Cabot Shores, the Red Island Trail is next to the church and is a favorite of Cabot Shores’ guests and the Cape Breton community members.  A number trees blocked the trail and “Red Island” was officially closed for days after Fiona.

On the Saturday before Canadian Thanksgiving,  community members, including a crew from Cabot Shores, cleared the trees and on that  Sunday a group from Ontario took a guided hike  before a  Thanksgiving feast. We saw a number of trees down along the Red Island Coastline with a loop along  MacDonald’s Pond.

Foliage More Muted on Cape Breton Due to Fiona 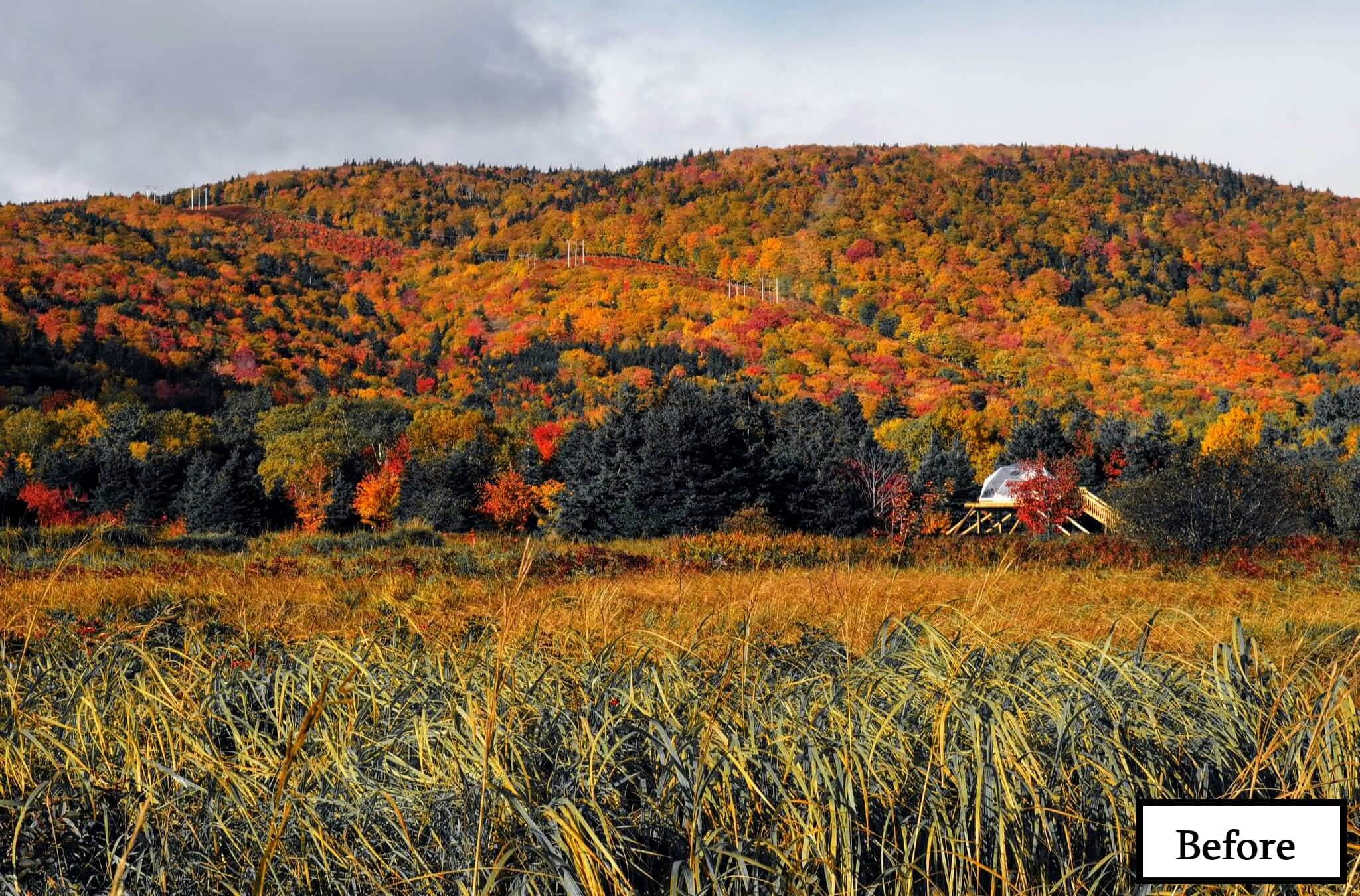 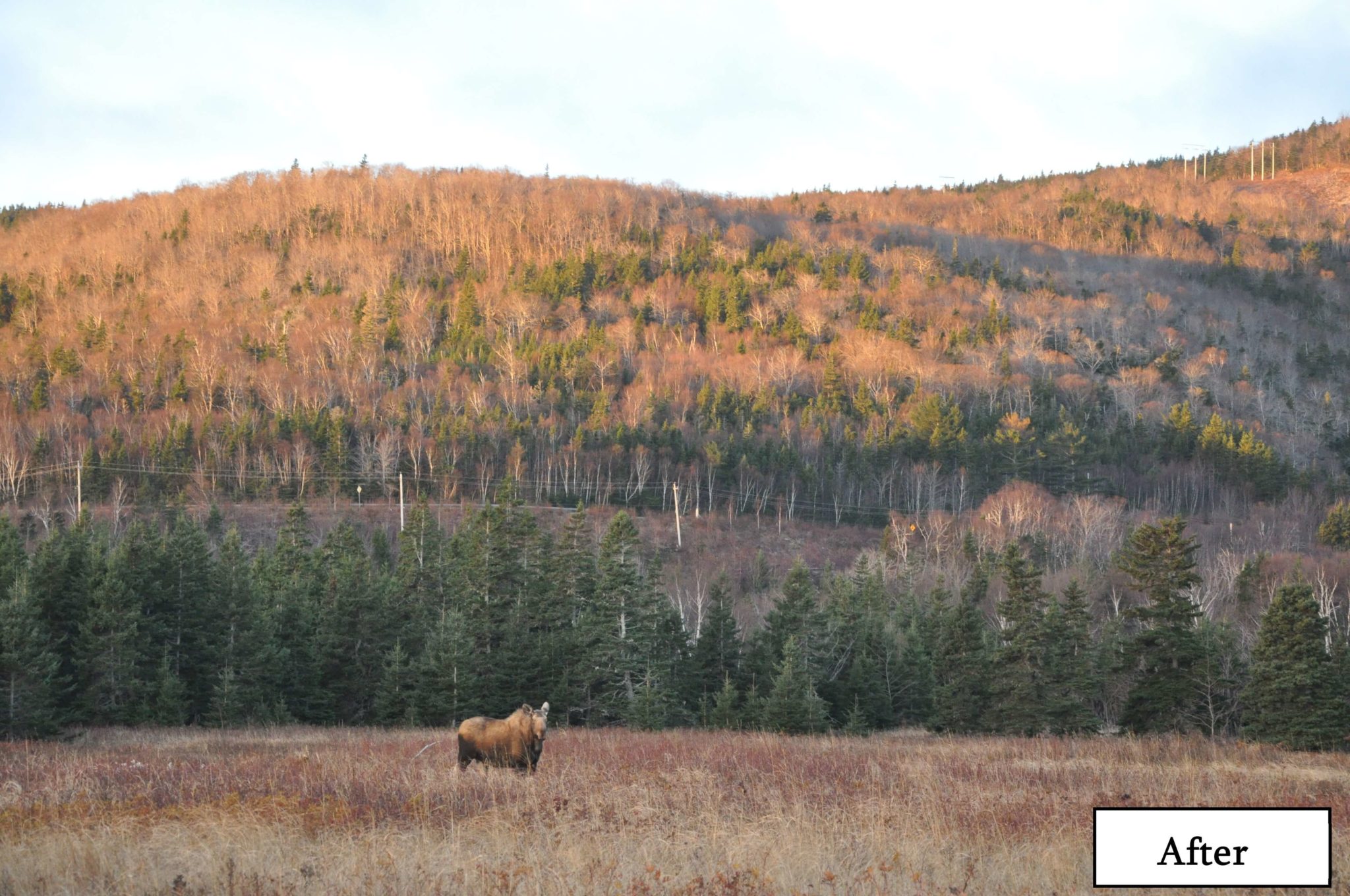 Here how it looks in years before and after we got hit by hurricane. Fiona shredded leaves on maples and birches, so that the foliage was more a brown rather than spectacular reds and yellows is in previous years.  We also had a decrease in apples since they were knocked down early by Fiona, and the moose weren’t as present in our orchard without the apples.

Hurricane Fiona attacked the Cape Breton Coast and changed the contours of our Eagle Feather Beach.  Huge waves crashed and breached the beach opposite Cabot Shores, going into Church Pond and Indian Brook, while wiping out a swimming area that delighted summer guests (hopefully by next summer, the coast will change again!) 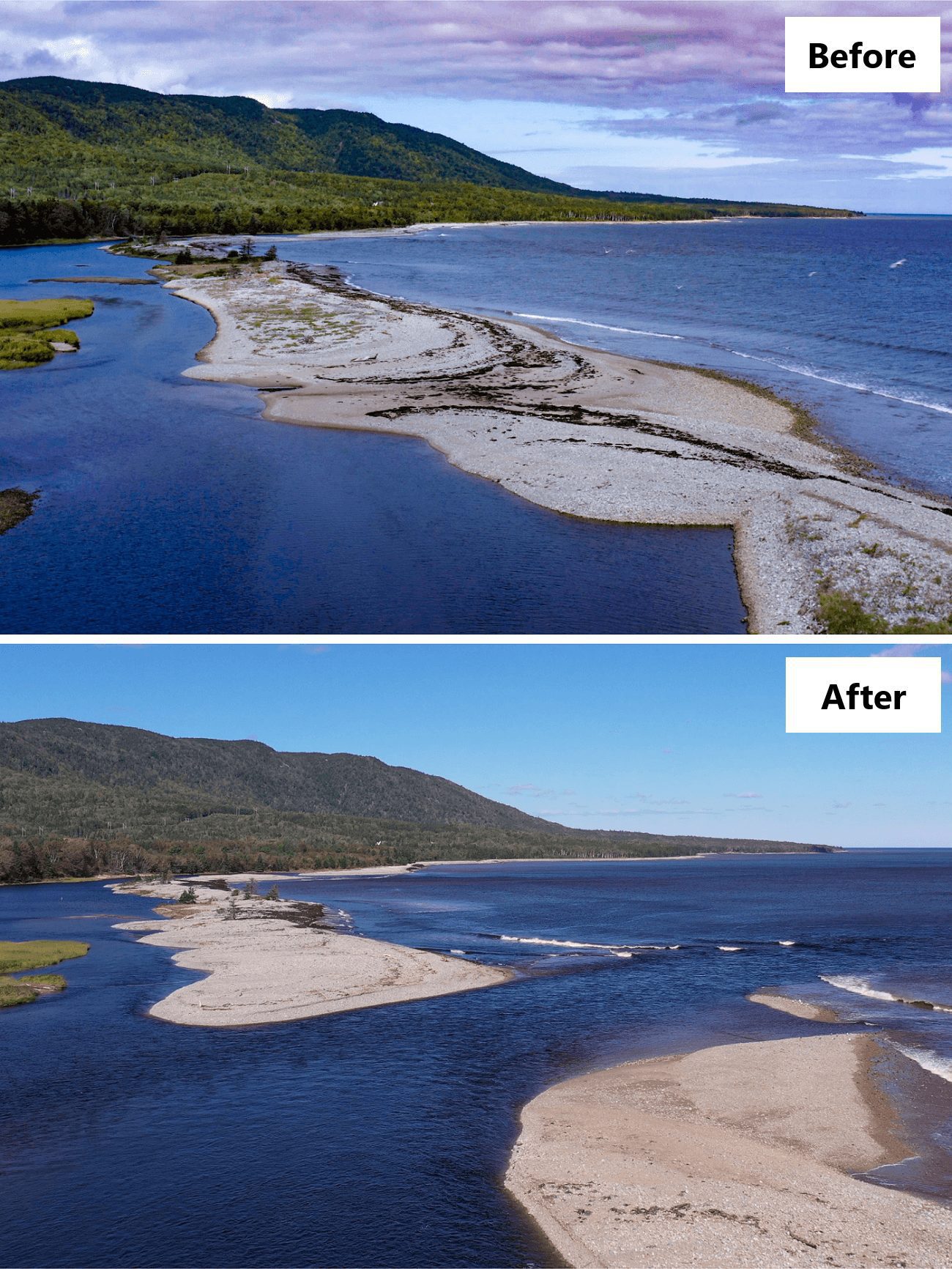 A Documentary on the Cape Breton Coast is being made for a German broadcasting network using Cabot Shores as a home base.   It is a wildlife documentary and Cabot Shores has been a key location for the filming by Christof, Almut and Alain of CoraxFilms. They were particularly interested in capturing the fall foliage on Cape Breton during October.  They saw a lot of wildlife but the foliage on Cape Breton was  muted due to Fiona shredding the leaves.

They stayed in a chalet for 6 weeks. As a “thank you” they sent us a short video highlighting the Fiona Hurricane and Eagle Feather beach where they had a blind for filming a pair of eagles feeding and living in a big spruce tree that can be seen from Cabot Shores, taking a canoe and the Eagle Feather ferry to do their filming at sunrise and afterwards. Graciously they filmed Dr. Paul providing some music in the Bistro and promised to be back next fall for more filming of Cape Breton.

As I mentioned, Coramax films is delving into wildlife around Newfoundland and Nova Scotia, especially Cape Breton.  Near Cheticamp and along the Skyline Trail, they saw and filmed moose and a number of black bear and cubs.

At Cabot Shores, they filmed a number of otters and beavers swimming in Church Pond, blue herons, and a blind on Eagle Feather Beach which provided a great vantage point for eagle watching.  Because the foliage was muted, the Corax crew has decided to return next fall to Cape Breton and to Cabot Shores in search of more fall colours and our special mix of wildlife and Maritime coastline.